On Margaret Thatcher and empathy

Margaret Thatcher would have been delighted at the way her death is being treated by the left.  What better compliment could there be for the woman who did as much as she could to dismantle society into a collection of individual men and women than to treat her death as so important?

The neo-liberal project was and is all about shifting our thinking from empathy, from community well-being, from collective action and compassion for others to self-interest, to individual motivation, to all too often, greed.

So dismantling the collective provision of free health care, education, affordable and adequate housing, pensions, provisions for people who are caring for others – all of those mantras of Thatcher and co – while they open up opportunities for profit, also teach us not to care for other people.  Smashing unions, undermining collective employment rights and reducing unemployment protections  – while they keep those seeking and in work desperate to find and keep employment and vulnerable to exploitation, also create competition and antagonism between workers.  To say nothing of the othering of people on benefits which is an ongoing necessity to justify continued cuts to the most vulnerable people in society. 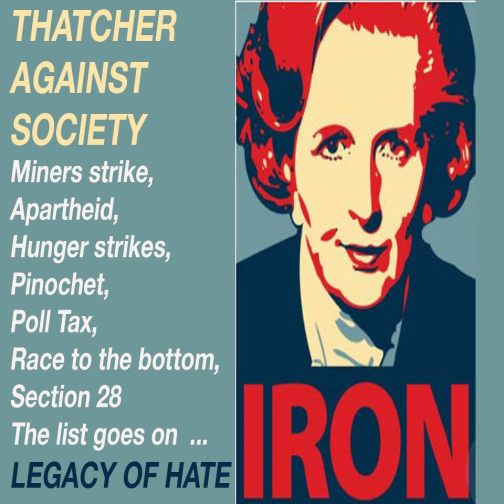 And she would have loved the lack of empathy on display.  Loved it.  Is there any clearer indication that the values of those seeking to destroy the social contract, seeking to promote selfishness and complete lack of collective responsibility, than the revelling in the death of an old, sick woman that’s been on display over the last few days?

Let’s tell the truth of Margaret Thatcher and other neo-liberals.  Let’s pay attention to her deliberate smashing of dissent by treating the British Police force as her own private army, criminalising protest activities and public gatherings.  Let’s notice that in Thatcher’s case her neo-liberalism was mixed in with social conservatism and nationalism with devastating results for the rights of all minority groups.  Let’s note the woman who hated beneficiaries was herself a beneficiary of the feminist movement, even while she trampled all over women’s rights.

By all means, let’s hate the neo-liberal project and the ways it has unleashed the disgusting, obscene gaps between rich and poor all over the western world by shifting our thinking from care, solidarity and collective responsibility to individual selfishness and greed.  Let’s keep organising, keep showing solidarity, keep championing compassion, equity and justice as guiding values for our society.

But I for one don’t want to celebrate her death, though I understand many, many others seem to feel that need.  She was just an individual, in a society.  And much as I detest her policies, I want to live in a world where empathy rules, not hatred.

2 thoughts on “On Margaret Thatcher and empathy”