Claims are not skyrocketing, victims are not paramount – it’s privatisation time, baby

Now we understand why ACC has been pushing a clinical framework for providing counselling to survivors of sexual abuse which counsellors, survivors, and advocates working in the sexual violence sector say is unethical.

The National government admits their plans investigate explicitly the privatisation of ACC.  Despite there being no economic need according to, well, economists.

Minister Nick Smith told us the new clinical pathway was all about the “paramount” needs of the victim, remember.  We were repeatedly told it was not about cost-cutting, and that sexual abuse claims were skyrocketing.

Just as well we have the Official Information Act I say.  This is what’s been happening to sexual abuse claims over the last ten years. 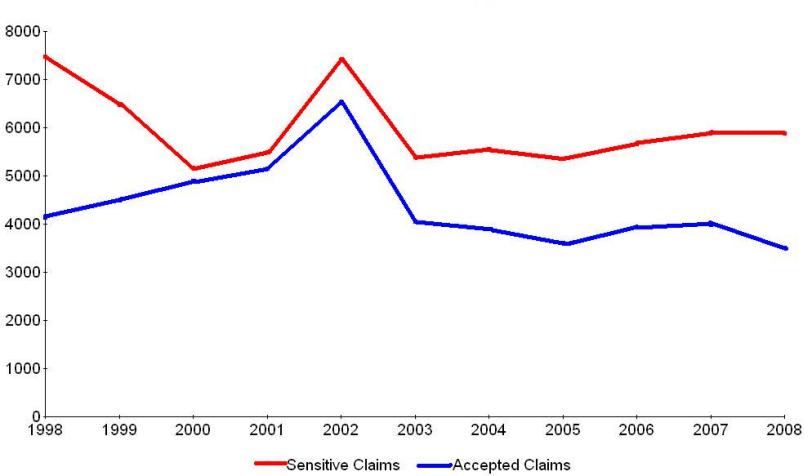 Two blips in 1998 and 2002, apart from which the trend is just steady claims at a little under 6000.*  Much clearer trend when we look at what’s happening to acceptance rates of claims.

More and more claims not meeting the legislative need for funding?  A different kind of sexual abuse?  Or ACC policing who they will fund more and more rigorously?

The new clinical pathway limits access to counselling to those who fit a narrow DSM IV mental health diagnosis.  Unless you have genuine certified mental health condition – which you can prove  in two visits to someone you’ve just met – and it neatly “fits” into the DSM IV categories, then no dice from the Sensitive Claims Unit.

The new re-jigged clinical pathway was released to the continuing-to-be-stunned sexual violence sector this week.  After genuine engagement, meetings with ACC officials, statistics and feedback from survivors that this pathway could prove lethal for some unable to access treatment, well, despite all this ACC have changed buggar all of the original pathway.

We need to get one thing clear here.  ACC funding for survivors of sexual violence was survivor-centred despite where the funding came from.  It has never been a survivor-led stream of support, or consciousness, or world-changing dismantling of systems which support rape and sexual abuse.

Counselling is important for healing and recovery.  Just not this kind of counselling, as the increasing number of counsellors who are refusing to work under these conditions testify.  ACC are defending how narrow their new pathway is by saying those who do not “fit in” can go to Rape Crisis centres, or into the mental health system.

Well guess what?  One of the main contributors to mental health issues, including people needing inpatient support in hospitals, is sexual abuse.  Up to 70% of women who are sectioned are survivors of sexual abuse, according to US studies.

Yet those working in mental health are not routinely trained in responding appropriately to sexual abuse, for either female or male survivors.  So shunting more survivors there hardly seems likely to have a good outcome for anyone, services or survivors.

And Rape Crisis Centres in Aotearoa New Zealand?  Poorly funded so with patchy cover around the country and services gaps for specific groups of people (ethnic groups, male survivors, people with disabilities, sex workers) according to the latest scan of services.

Yet, what if the ACC clinical funding pathway was to be restricted only for those with clinical diagnoses requiring counselling, and other survivors, whose needs are not so clearly within the “medical model” were able to access adequately funded alternative client centred services?  What if we took what worked within the community sector – crisis responses, advocacy and counselling – and funded it properly?

Legal challenges to the ACC debacle will be ongoing, as the sexual violence sector asks if the new framework meets ACC’s legislative obligations.  There will also, no doubt, be continuing direct action, as last weeks well-attended protests around the country showed the strength of feeling this cost-cutting is provoking. 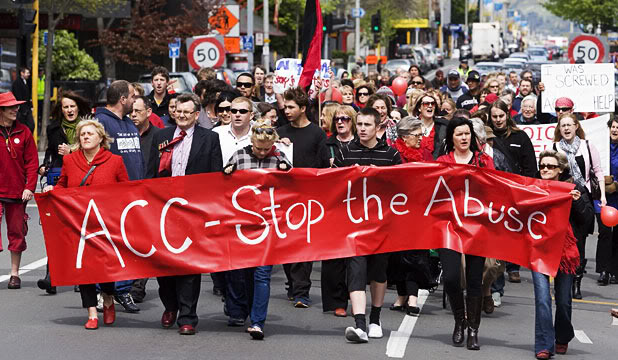 The sexual violence sector should not be wedded to ACC.  What do we usually call a relationship where one party does what they want, no matter what the other thinks?  Where one party holds the purse strings and only lets the other have anything if they’ve been “good”?

It may be time for a divorce.

*These figures, bewilderingly, do not agree with figures on ACC’s own website, on which I have blogged in the past.  It seems I owe Karl du Fresne an apology in this matter at least 🙂

2 thoughts on “Claims are not skyrocketing, victims are not paramount – it’s privatisation time, baby”