On the horrors of the sex and the older woman

Hat-tip to the Hand Mirror for alerting me to research showing that older women sometimes still like sex.

Conventional wisdom holds that women’s sexual activity and interest dwindles as time goes by, but research has shown that some women maintain satisfying sex lives well into old age.

Throwing aside, just briefly, that age thing, I’m wondering how “sex” was defined in this little study.  Are we just talking about intercourse?  Or a whole range of sexual delights?  Because sexual research with large numbers of women repeatedly shows that just intercourse may work some of the time, for some of the girls, but most of us like to have all of our bits incorporated into sexual pleasure.

Shere Hite’s work from the 1970s onwards showed that only 30% of women reported orgasming just from intercourse.  She turned theories of clitoral orgasm being “developmentally dysfunctional” – as opposed to damn good fun – on their, ahem, head.  Any sexual research which doesn’t ask women what kinds of sex they are having before they check out if we’re interested in it is just plain missing the point.

Back to the age thing.  How comfortable are we with women being sexual – especially women who celebrate being sexual but are older than the optimum “sexy age” of about 21?

Let’s look at a word newly coined to explore this very issue.  Cougar.  I’m 39, and delighted to say, a fully fledged cougar.  As in I am absolutely unashamedly a fan of great sex, and open to having it in my life wherever possible.

Now cougar in popular usage to describe women is mostly about us targeting younger men.  I do fall down a little here.  It’s unusual for me to fancy people younger than I am.  Not completely unheard of, but very unusual.

So can I reclaim the word “cougar”?  Or is it dehumanising? 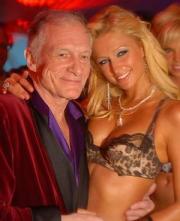 Self-proclaimed non-feminists tell me it’s a sexist word.  This is because men have been dating younger women for centuries and for them it’s cool.  It makes them look desirable and sexy.  You know, like Hugh Hefner.

Actually, many feminists take issue with being described as predatory carnivores if they dare to celebrate being sexual past the age of 30 too.

But no, the real reason I know calling myself a cougar is completely liberatory is that there is a reality TV show about a, gasp, 40 year old woman who is, gasp, still hot.

The Cougar – a woman called Stacey – gets to choose from 20 men in their twenties, who spend the programme performing various tasks to win her heart.  It’s totally empowering.  And not full of horror at what happens to women as we age.  It’s more aspirational.  If you don’t believe me, check this out.

I think I might apply.  I wonder if they run bisexual versions 😉